General Packet Radio Services (GPRS) is a best-effort packet-switching protocol for wireless and cellular network communication services. It is considered best effort because all packets are given the same priority and the delivery of packets isn't guaranteed.

The 3rd Generation Partnership Project (3GPP) standardized GPRS in early 1998, but commercial cellular networks did not widely adopt the technology until 2000. It was the first technology successfully deployed in 2G mobile phone systems.

This approach was a more efficient use of available capacity because, by splitting data into packets and tags, GPRS shared overall capacity among multiple users. This was possible because everyone wasn't online at the same time often. The destination address became available when inserted into the packet, which enabled packets from multiple sources to transmit through a single link.

Difference between GSM and GPRS

The primary difference between GSM and GPRS is that GSM is a circuit-switching system, while GPRS is a packet-switching system. GPRS offered more data transmission options for GSM-based devices, as GSM networks at the time could only use Short Message Service (SMS), for example, to transmit a small amount of data. 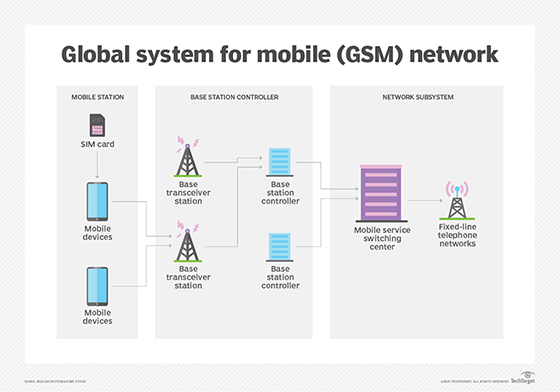 Sometimes called a 2.5G network, GPRS provided data rates from 56 kilobits per second to 171.2 Kbps and uninterrupted connectivity to the internet for mobile phones and computers. However, GPRS by itself did not offer the mechanisms required to browse the internet. To enable seamless internet access, Wireless Application Protocol (WAP) was needed. It emerged in 1999.

The key characteristics of GPRS are speed, instant data connections -- depending on the signal strength and coverage -- and the facilitation of mobile application development. So, GPRS enabled capabilities such as file transfer, online chat, and mobile, web and multimedia applications, as well as video conferencing platforms, on mobile devices and laptop computers.

The industry classifies GPRS mobile networks by the number of slots they can accommodate. Multislot classes determine the speed of uplink and downlink voice and data transfer range from 1 to 45. As levels of operation and capability vary, a good indicator of a device's service ability is its GPRS performance class. GPRS has three classes based on an ability to connect GSM and GPRS services.

The three classifications are as follows:

GPRS data speeds depend on the number of time slots available for use in either direction. These slots send and receive data, uplink or downlink. GPRS also uses channel encoding processes called cyclic code and convolutional code, the latter of which is a type of error-correcting code. 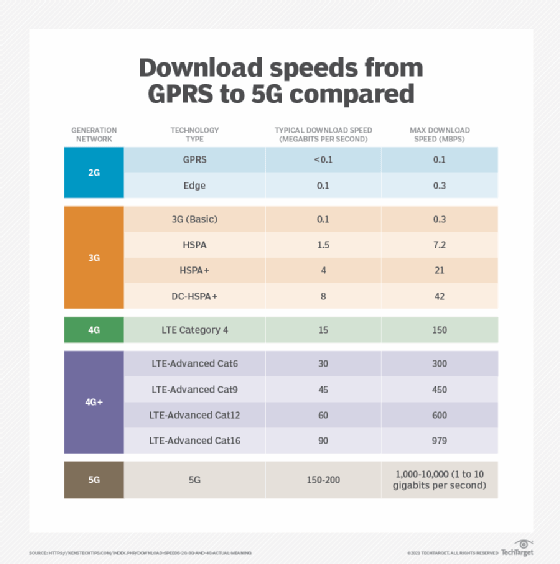 Difference between GPS and GPRS

GPS is a satellite-based navigation system powered by approximately 30 satellite systems in orbit owned and operated by the U.S. Department of Defense (DOD) but available for general use worldwide. It enables GPS receivers, including consumer devices, like smartphone navigation systems, to pinpoint their geographic location. GPRS, on the other hand, is based on GSM communications and other services, such as SMS, Multimedia Messaging Service (MMS) and circuit-switched cellular phone connections.

In theory, GPRS packet-based services cost users less than circuit-switched services since communication channels are being utilized on a shared-use, as-packets-are-needed basis rather than dedicated to only one user at a time. It was also easier to make applications available to mobile users because the faster data rate meant middleware currently needed to adapt applications to the slower speed of wireless systems is no longer be needed. As GPRS become more widely available, along with other 2.5G and 3G services, mobile users of virtual private networks (VPNs) were able to access the private network continuously over wireless rather than through a rooted dial-up connection.

With the emergence of Enhanced Data GSM Environment (EDGE) mobile handsets, the first smartphones from the likes of BlackBerry, Nokia and Palm laid the foundation for today's wireless data-based ecosystem. 2G GPRS data usage rapidly evolved the wireless industry to become more centered on data communication, rather than voice.

As a result, GPRS became widely available across mobile services and users of VPNs. Compatibility with Bluetooth, a standard protocol for replacing wired connections between devices with wireless radio connections, and X.25, a packet-based protocol primarily used in Europe, helped drive adoption.

The evolution of GSM with GPRS and the emergence of EDGE and Universal Mobile Telecommunications Service (UMTS) also helped cement cellular data technology's place in global communications. The end of GPRS is in sight as newer technologies like 3G, 4G and -- most recently -- 5G have entered the marketplace. GPRS, along with 3G, is slowly being phased out.

3GPP -- which, since 3G, has standardized all cellular features and specifications -- approved 5G New Radio (5G NR) standards in December 2017. The group is currently working on Release 18 of those standards.