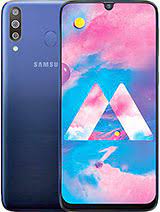 The Samsung Galaxy M30 is a mid-range smartphone that comes with hardly any drawback. The widescreen with high-resolution gives a nice visual experience. The robust configuration with a healthy battery back up can support to play a game without any disturbance. Also, users can enjoy clicking pictures all through the day by the cameras. It is provided with huge storage that can store a lot of data. Overall, the device is a perfect choice in this price bracket.

Just another mid-range device from Samsung
Display and Configuration
The Samsung Galaxy M30 flaunts with a 6.4-inch Super AMOLED display having a resolution of 1,080 x 2,280 pixels. The high pixel density of 394 PPI gives an enticing visional experience. The 19.5:9 aspect ratio gives it a trendy look to hold.
Under the hood, it packs an octa-core processor setup (a 1.8GHz dual-core Cortex A73 and a 1.6GHz hexa-core Cortex A53), which is accompanied by a 4GB RAM. The combination of these help to ease the performance in multitasking and gaming. The phone is based on Samsung Exynos 7 Octa 7904 chipset. The whole operation is done by Android v9.0 (Pie).
Camera and Storage
In terms of optics, the phone sports a triple primary camera having 13MP, 5MP and 5MP lenses. These three lenses can capture a picture with every detail in any environment. The frontal lens of having another 16MP can click awesome selfies that users would love to share.
The Samsung Galaxy M30 comes with the internal storage of 64GB, which is huge for keeping numerous data and large files. It also has a memory slot, which can be used up to 512GB when required.
Connectivity and Battery
The Samsung Galaxy M30 comes with 4G-VoLTE connectivity in both the SIM slots. It also has options such as Wi-Fi, Mobile Hotspot, Bluetooth, GPS, Glonass and many more. The device draws the charge from a Li-ion battery. The capacity of 5,000mAh Li-ion gives it a healthy backup for hours.