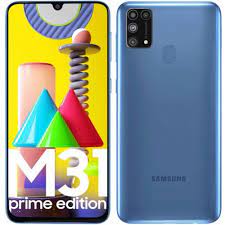 Verdict
Samsung Galaxy M31 Prime is an all-rounder device available in a decent price margin. The M-series variant is bestowed with a chipset manufactured by the brand itself, backed by a massive 6GB RAM that excels the performance score of the phone. You can enjoy impressive video and sound quality, all thanks to the Dolby Atmos stereo speakers and impressive display features packed within the smartphone.
Comprehensive affordable choice
Display and Camera
Samsung Galaxy M31 Prime features a 6.4-inch Super AMOLED screen with a highly saturated pixel density of 403ppi that delivers radiant clarity. The smartphone boasts a bezel-less water-drop notch display which is coated with a sturdy Corning Gorilla Glass v3 protection. The device comes with an aspect ratio of 19.5:9 and a screen resolution of 1080 x 2340.
The smartphone flaunts a quad camera setup on its rear side with 64MP f/1.8 facilitated with 8x Digital Zoom, Wide Angle Primary Camera and an 8MP f/2.2 Ultra-Wide Angle lens along with a 5MP f/2.4 Macro Camera supported by another 5MP f/2.2 Depth lens; all with ISOCELL Plus sensor. On the front, the device is geared up with a single 32MP f/2.0 selfie lens with Exmor RS sensor.
Configuration and Battery
Samsung Galaxy M31 Prime is packed with 6GB RAM and a Samsung Exynos 9 Octa 9611 chipset. The smartphone runs on an Octa-core Cortex A73 and Cortex A53 processor showing a functional speed of 2.3GHz and 1.7GHz accompanied by a Mali-G72 MP3 GPU, offering seamless performance.
The smartphone is powered by a massive 6000mAh non-replaceable cell. The Li-ion type battery is compatible with 15W Fast Charging technology.
Storage and Connectivity
Samsung Galaxy M31 Prime is offered with an enormous 128GB storage which can be expanded up to a limit of 512GB if needed. On the side of connectivity, the smartphone supports 4G VoLTE connection teamed with other features like Wi-Fi Direct, Mobile Hotspot, Glonass with A-GPS and a v5.0 Bluetooth connection.